Well to make a long story short, last Saturday Josh Stafford and I hiked 43 miles with around 8000 feet of elevation gain in Grand Teton National Park. We planned (Josh likes to say that I was the one who planned it...) to hike from Paintbrush Canyon all the way up and around the Tetons and out Death Canyon. It was supposed to be around 35 miles and 6000-7000 feet elevation gain. We added a bit more... by accident, you could say.

So we woke up at 4:00am, ready to go conquer a good hike. Kenton drove us to the trailhead and Josh and I started hiking at 5:30am or so. We had to hike around an hour in the dark, which was a bit unnerving I must say, being in bear country. So we headed up Paintbrush Canyon, which was absolutely gorgeous in the sunrise.


With my new point-and-shoot camera, I can take some video now! :)

After reaching near the top of the canyon, we started hearing elk bugling in the distance. What an awesome experience! Then we hiked a bit further and ran into a couple right on the trail! Unfortunately I didn't get out the camera before we scared them off... hiking took more priority than photography on this trip: we had probably 30 miles left to go. Maybe next fall I can get some elk photos up here. :)

Our next challenge was to hike up to Paintbrush Divide (the place we went to on the backpacking trip - dividing Paintbrush and Cascade canyons). The trail is a little make-shift at the moment because of snow I think. So we had a slightly sketchy climb up a boulder/scree field till we finally reached the top and could finally hike downhill for a while. 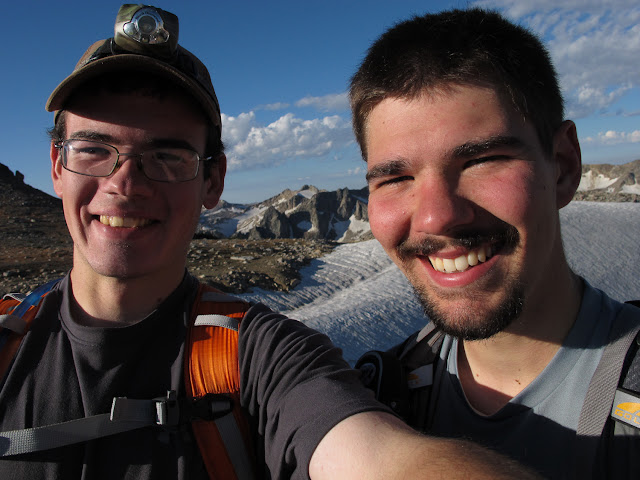 So we started hiking down from the Divide into Cascade Canyon, going past Lake Solitude and our camping site on the way. There is a fork in Cascade Canyon, with one trail heading up to Solitude (where we were coming from), and one heading south up to Hurricane Pass (which is directly behind the Teton mountains, as you'll see). So we hiked from Lake Solitude down to the fork, filled up water, and started the hike up the south fork of Cascade. On the way up some switchbacks, we had another wildlife encounter: black bear! The slightly-larger-than-cub black bear was right on the trail (sound familiar?), so we both immediately take out our bear sprays, ready if he should charge us. We tried scaring him off, but he didn't pay much mind to us (which isn't too good). Finally he moved off the trail enough so we could pass and move on. So once again, no photos... but we were on a mission, eager to finish this long trek. So we continued. I was definitely starting to feel my legs on the last uphill section of Hurricane Pass, but we made it up and were able to hike downhill for a while again! Here's the view from the top of Hurricane: 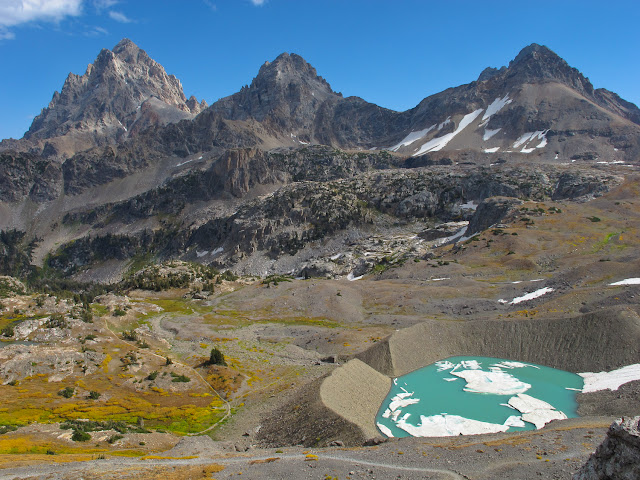 So we continued on, with about 20 miles or so left in my estimation. We went downhill for a while and stopped at a stream to snack some more and fill up water. There were some pretty flowers there (including indian paintbrush and lupine), so I took a few shots: 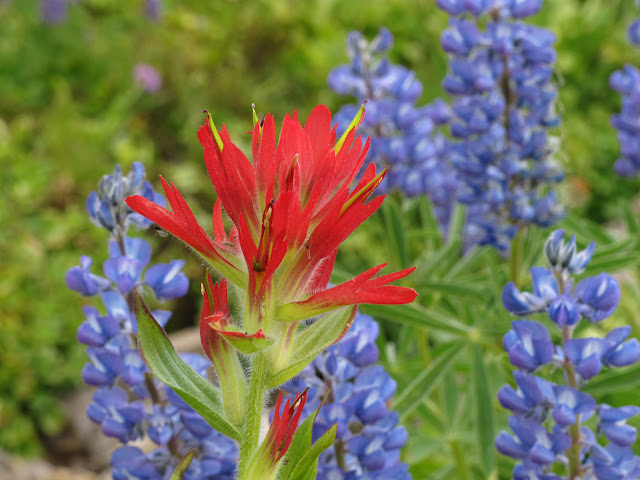 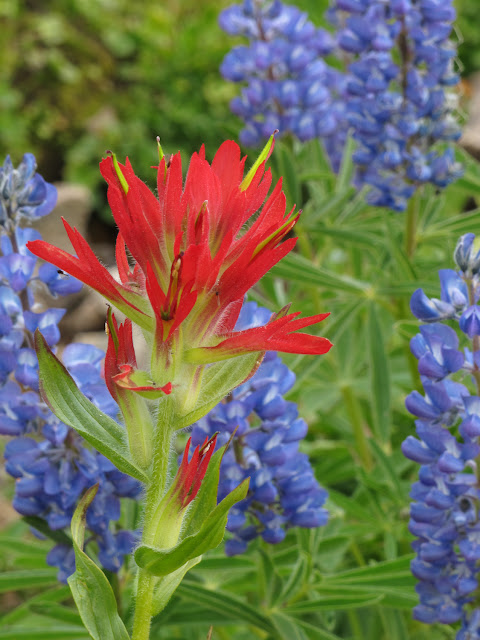 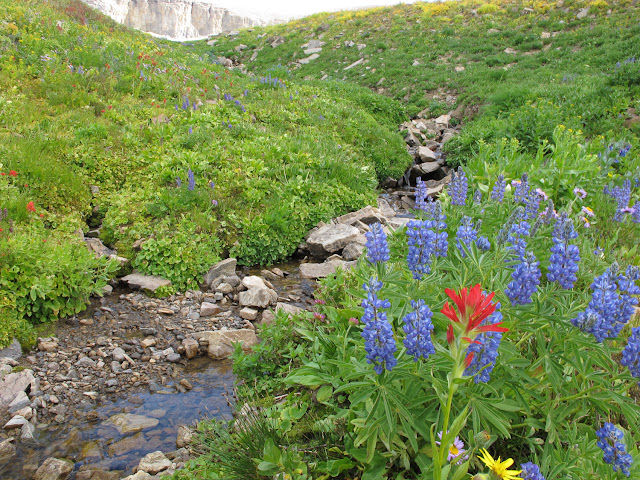 No more photos from this point on... we were too busy finishing the hike. :) So we headed down, and up, and down, and up again, and so on until we finally thought we had climbed the last uphill on our hike. Well, we got to the top of the ridge and found that the trail had at least some more ups left. So we started climbing, and climbing, and climbing... and it seemed that we were just getting way too high and far away from the canyon we wanted to be in. So we took out our trail map, inspected it, and decided we must have missed another trail that headed where we wanted to go. So we headed back down and cut across, off-trail, to try and find the other trail. This is where we added some miles and elevation gain to our hike. We went all over the place in this little canyon/saddle/bowl/thing, and finally climbed up to the top of the ridge on the other side, looked back, and to our great disappointment saw the trail we were on before actually started headed down exactly where we wanted just a bit further down the canyon. We were pretty upset with ourselves, but lesson learned! Get a better map! Follow the trail in front of you! So anyways.... we went all the way back across to our trail, and hiked up to Static Peak Divide. I think this is the highest point yet on our hike, at about 11,000 feet. From here it was all downhill to Death Canyon and Phelps Lake. It seemed to take forever. Thankfully, our legs actually felt pretty good and we were able to go down pretty fast without hurting. We finally reached Phelps Lake, after hiking down Death Canyon in the dark, and had to hike another 4-5 miles around the lake and to the road where we were hoping a car was waiting to pick us up. We tried talking (and Josh sang that 100 bottles of coke on the wall song) for a while, but by the end we were both pretty quiet. It got pretty tiring to keep on hiking, and we were both ready to end. Finally we reached the road and saw Jared's suburban waiting there for us. Praise the Lord! It was about 9:20pm. We were happy to be finished.

So that's the hike that I'm pretty sure totaled around 43 miles and 8000 feet elevation gain or so. It topped Josh's day hike record of 40 or 41 miles that he did while on the Appalachian Trail, and it sure topped my previous record of around 20 miles! A great experience, for sure... but we both decided that we're keeping day hikes under 30 miles from now on. :)

So thankful to the Lord for this awesome experience, and the strength He gave us to complete it! :)